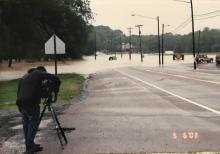 WBIR reporter filming the flooding. Stuck guy in middle of the water.

As if the blizzard of ’93 wasn’t enough, two months later, east Tennessee experienced the flood of ’93. The blizzard set the stage. When the snow melted it went a long way to filling creeks and other bodies of water. Then the rains began and kept coming.

It wasn’t just discouraging to have clouds and rain for days on end, but then after a particularly heavy night’s rainfall, it became impossible to get around town. Just as it had during the blizzard, school was cancelled.