Dave Chesney, a native of Union County and father of country music chart-topper Kenny Chesney, gifts the Historical Society with a donation of official Kenny Chesney memorabilia. Record labels recognize their artists’ achievements with record milestone awards, such as gold (500,000 albums sold) and platinum (1 million albums or 500,000 singles sold). These keepsakes are also presented to those who support an artist’s career; as such, Chesney has received several awards commemorating his son’s achievements.

Southern Spirit performed selections from Old Stuff, their latest album and the name of the signature song, for the Union County Historical Society at the Union County Museum in April.
Shandy Glover and Chris Hooper of Sharps Chapel roots combined their talents in songwriting, arranging and guitar picking to bring authentic country music to the audience.
Glover, lead guitarist and lead singer, debuted the Martin, a 54-year-old guitar gifted to him by Hooper a few years back. 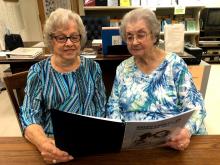 Reflect on Union County’s unique history with a visit to the Union County Museum and Genealogical Library, where you will feel right at home when greeted with a, “Welcome, how may I help you today, and who do I have the pleasure of meeting.” Museum volunteer Wanda Byerley says that many promptly return a smile and a family name that they wish to learn more about.

These wonderful 16 x 20-inch (framed 20 x 24-inch) photographs were purchased some years ago at Doris’ Auctions on Rutledge Pike. According to the owner, the auctioneer identified them only as a Union County couple. A lovely lady who lives at Corryton made the purchase. It appears from the size and quality of the pictures and frames that the family was well to do. The carved frames with curved glass are unique. It also appears that the lady’s picture is hand-colored. Hand-coloring was the only way to achieve color until colored film came on the market.