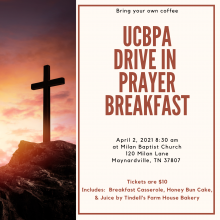 Union County Business & Professional Association will host its annual Prayer Breakfast as a drive-in event at Milan Baptist Church on Good Friday, April 2.
Pastor Jody Winstead will offer the prayer and the message. The choir will provide music. Members of the church will direct the parking.
Tindell's Farm House Bakery will offer a modified breakfast of juice or water, sausage-egg casserole, and a slice of honey bun cake for $10.

Declaring it's a new day in UT Athletics, Sterling Henton electrified the Union County Business & Professional Prayer Breakfast with his energy, his optimism, and his voice. After BPA President Martin Shafer introduced Sterl the Pearl as he was known in his New Jersey high school and into his college career at the University of Tennessee, Sterling explained that he really never intended to go to college in the South. In 1987, he was focused on leading his high school to a state championship in three different sports. Alabama called, he refused. Florida called, he refused.