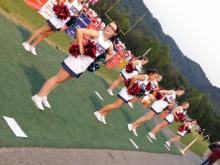 Spirits were high Friday evening at Union County High School for the homecoming football game. The parade, held before the game, had drawn people in and showed the young women who were running for homecoming queen, as well as, the cheerleaders and members of the band. The Patriots played the previously undefeated Hancock Indians, beating them 35-14. This is Union County's second win this season. Student moral is high and the team is in high spirits as they are determined to erase the previous two seasons with the next two. 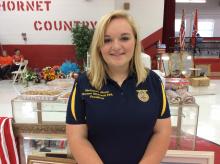 Hello! My name is McKenzie Sharp and I am running for homecoming queen for FFA (Future Farmers of America.) I am President in the Horace Maynard Chapter. I would like to help show Union County and the rest of the world that FFA is still here. It seems we are drifting from farming and going in another direction. Did you and your family eat today? That food came from a farm. No farms, no food. FFA has shaped me to who I am today, and it has helped me get through the tough times in my life.

Hi, my name is Abby Pursiful. I am a senior at Union County High School and I am running for homecoming queen. The homecoming fundraiser runs approximately six weeks. This allows each club the opportunity to raise funds. I am representing the Skills USA Cosmetology division, of which I am the president. Ninety percent of the proceeds raised will be donated to Skills USA Cosmetology and ten percent of the proceeds will be going to the athletics department.