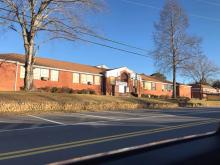 Birchwood Elementary School, picture courtesy of Shannon Wright (because I can't locate mine!)

The year 2005 was momentous for me. I had been looking for work in an ever widening circle from Athens. I had interviewed in Monroe, Loudon, Bradley, McMinn, and sent applications to every school district that I could drive to in 45 minutes.

Finally in August, I sent applications to Knox and Hamilton counties, even as I cringed at the commute time it would be to any school in those counties. Two weeks after I had sent those applications, I received a phone call from the principal of an elementary school at the northern tip of Hamilton County.