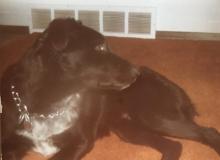 My husband had never owned a dog when he was growing up, but he loved them and dogs loved him. He said dogs that would tear up anyone else in his neighborhood would fawn on him like a little puppy.
So after we were married and in our own house, he insisted on getting a dog. I was not included in that selection.

I have celebrated Independence Day in some amazing ways. When we lived in Athens, (Tennessee, not Georgia), there used to be an awesome fireworks display every 4th of July. The first one I remember seeing was in the Proffit’s Shopping Center on Decatur Pike. It was fairly small, but several people, including the Proffit’s family, forked out for the town to see some nifty fireworks. Later when the city built a park out near I-75, the display was held there. Much bigger, much more impressive. The fireworks were shot off to music played on the local radio station.